For most liquids, the time they take to freeze varies depending on their quantity. But generally, beer can freeze at about -2.2° C (28° F).

Apart from the quantity of the beer, the alcohol concentration also plays a vital role in determining the freezing duration.

Due to the variation of ethanol which makes the beer stronger or milder, the ones with a higher concentration of alcohol freeze at a lower temperature.

1 How long does it take to freeze beer?

Compared to liquids like water, beer contains alcohol and sometimes even sugars and other additives. In such cases, beer takes a much longer time to freeze.

If you compare a beer ice cube with one that’s made from water, you’ll notice that the beer cube is grainy, mushy, and easier to break (resembling flaky ice).

Moreover, the type of climate that you live in can also play a factor. Hotter weather may cause slightly longer freezing times. On average, beer can take two to three hours to freeze.

If you want to freeze beer more quickly, you can check out this video for two valuable tricks.

When you freeze beer, the ethanol that it contains will usually stay in a liquid form. This is due to its extremely low freezing point.

This ethanol stays suspended among the ice crystals.

If you remove these crystals, you can increase the alcohol density of the beer and successfully make it stronger. But if you freeze the beer and thaw it later, there will be hardly any change in the alcohol level.

3How long does it take for beer to explode in a freezer?

Many people dread the experience of beer bottles or cans that explode in the freezer. It can be messy and sometimes dangerous.

When we drink beer, the liquid expands in volume by 7-8%. This expansion often causes the container to break, crack or explode.

Another reason could be due to incomplete fermentation. If a beer bottle is sealed before it ferments appropriately, it can result in excess carbonation. This causes an increase in pressure inside the bottle, leading to its explosion or damage.

You can generally keep beer bottles in a fridge for roughly 3 hours max, after which most people would consume or take it out because the bottle could explode or get damaged due to the expanding liquid volume or fermentation.

4How long can you leave beer in a freezer?

If you want to freeze beer, 2-3 hours is approximately a reasonable duration. If you prefer a more chilled drink, you can keep it for 40-90 minutes (an optimum limit for many people).

If you’re only planning to reduce the temperature slightly, 20 minutes may do the job.

5Is it safe to drink beer from a freezer?

Most of the time, it’s safe to drink beer from the freezer. And many may argue that it tastes better when chilled.

But besides that, beer can lose its taste and quality if you repeat the freezing and thawing process too much.

Some people may not be suitable for a cold beer. So always check with your health advisor to know if it’s okay to drink.

10 Steps To Reduce Your Refrigerator Energy Usage And Cost

Can I Put My Fridge In The Dining Room?

What is the freezing point of the alcohol? 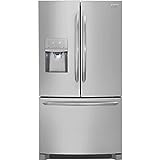 Latest, from your blog…

This website is about making things simple! Researching for a new refrigerator, one that will fit your specific needs, isn't an easy task! ... simple because there are too many models, too many features, too many brands and so on... Antoni Singger will help you make an informed decision. Take advantage of these complete refrigerator reviews and learn what are the best models on the market today. If you want professional guidance at no cost at all, then you are in the right place! In these reviews you'll be able to scan the complete features sheets, lists of pros and cons, customer rating, video presentations, infographics and much more.
Contact us: antonisingger@yahoo.com

Should you buy the Edgestar 3.1 Cu. Ft. Energy Star Compact...

SPT RF-244SS Compact RefrigeratorReview – Get a closer look at this...

Samsung RF28HMEDBSR Review – This is why I love this french...

How to choose a compressor (capacity) for a refrigerator?